We attended our friend’s wonderful wedding party at the hilltop terrace in Nara recently. 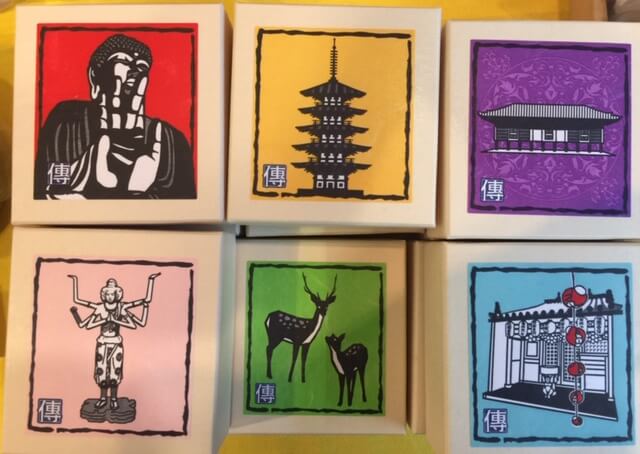 And since we have plan to do a short run in the next day morning to the nearby Wakakusayama,

We decided to stayover at the nearby hotel for a night.

Upon checking in, I found something interesting at the hotel souvenirs’ corner, these pretty small boxes caught my attention immediately. They are traditional sugar candies that reminded my childhood memories, they are widely known as Konpeitou,金平糖

The company name砂糖傳, also known as SATOUDEN in English produce these candies has been around for about 160 years. Their main branch is located at Naramachi奈良町 literally ‘Nara Town’ is the former merchant district in Nara during the Edo period.

The name of the founder of Satouden is Masuo Denjiro who opened his yamato tea house at the current shop during the Ansei period. At that time, he wanted more people to know about yamato tea so he travelled to Osaka and Sakai by sea to promote his tea supplied to the wholesalers. Upon returning back each time, he make use of the empty spaces in the vessel and transported expensive sugars back to Nara to sell. These transported sugars are the black sugar originally from Okinawa, Shiroshitatou from Tokushima and Wasabon. Due to the superiority of these sugars, Masuo Denjiro was later called砂糖屋の傳次郎で砂糖傳だ.

The brand name砂糖傳was officially started in Ansei 5th year. The importance and the many numbers of Buddhist temples and Shinto shrines in Nara attracted many noble visitors to visit hence business for Japanese sweets starts to flourish and the use of good quality sugars went into demand. Satouden became a well-known brand within the local commoners even until now.

The word Konpeitou originally came from Portuguese word ‘Confeito’, and since Nara has a long history of 1300 years, it is therefore commonly known as Nara Konpeito.

The history of producing this type of candy was introduced to Japan in the early 16th century by the Portuguese traders. During those days in Japan, the infrastructure and refining technology of sugar had not been established, resulted in getting sugar is rare and expensive

Back in the olden days, the making of these sweet candies Konpeitou was tedious and labour intensive. An iron pot with the diameter of 180cm which weighs up to 800kg was designed to mix the ingredients of sugar and honey in a clockwise direction at the speed of 2 rotations per minute. It takes up to 1 day to produce 1mm of the coated mixtures and usually takes approximately 2 weeks for a complete 15mm droplet. Because the iron pot was tilted at the angle between 30 to 40 degree, the artisan will use his skilful experience together with the use of physics law method, shaped each droplets of candies into 24 corners. To achieve this unique subtle angle, the artisan need up to at least 3 years of practice to bring out this amazing formation.

In the year 1569, Oda Nobunaga was presented with a flask of Konpeitou from Luis Frois who was a Portuguese who wanted to obtain the permit for Christianity missionary work. Towards the end of Meiji period, machineries were seen started to replace manual labour from then.

Satouden packaged these konpeitou into different boxes of design that symbolize Nara. They have 10 kinds of designs namely The Big Buddha, The Pagoda, The Deers, The Naramachi, The Ashura, The Nigatsudou, The Biwa, The Shoshuin, The Wakakusayama and their own home brand The Satouden. These sugar candies come in a wide selection of flavours and colours. Various japanese tea flavours like hojicha, genmai and sencha are popular among the locals as well as the Ume (Plum) flavour, Salted flavour, Black sugar flavour, Ginger flavour, Coffee flavour, Fruity Blue Berries flavour.

I hope you enjoy reading my article while walking down the memory lane with me.